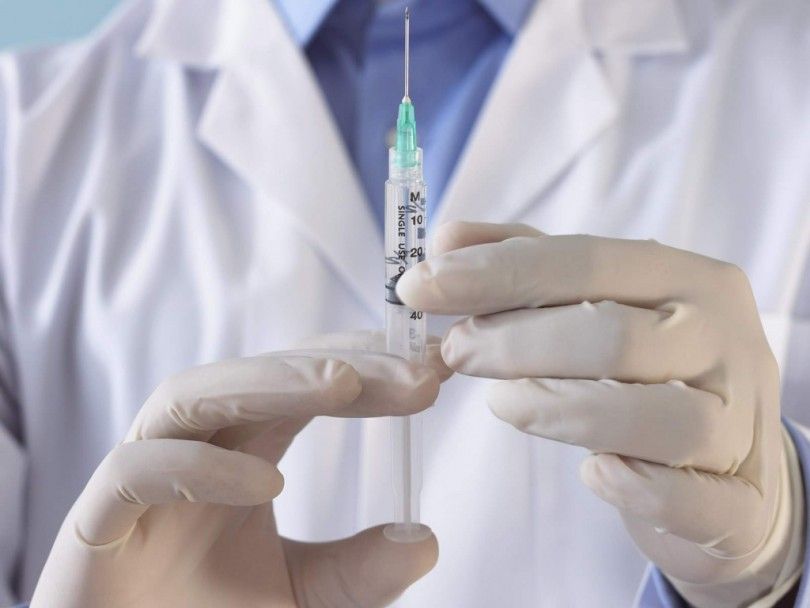 3D printing revolutionized the manufacturing of complex shapes in the last few years. Using additive depositing of materials, where individual dots or lines are written sequentially, even the most complex devices could be realized fast and easy. This method is now also available for optical elements. Researchers at University of Stuttgart in Germany have used an ultrashort laser pulses in combination with optical photoresist to create optical lenses which are hardly larger than a human hair.

Complex 3D printed objective on an optical fiber next to a fly.

The femtosecond laser, with pulse durations smaller than 100 femtoseconds, is being focused in a microscope into liquid photoresist which rests on a glass substrate or an optical fiber. Two photons of the red laser beam with a wavelength of 785 nm are being absorbed simultaneously in the focus and expose the photoresist. This crosslinks the polymer and hardens it. The laser beam is directed with a scanner or by moving the substrate over the substrate. After exposure, the unexposed photoresist is washed away with a solvent. Only the hardened transparent polymer remains and forms the optical element.

Using this method, optical free form surfaces can be created with sub-micrometer accuracy. The precision of the 3D laser writing allows not only for construction of common spherical lenses, but also the more ideal surfaces such as paraboloids or aspheres of higher order are possible. Particularly optical lens systems with two or more lenses can be realized for the first time with this method. This opens the door to aberration correction and microoptical imaging systems with unprecedented quality.

PhD student Timo Gissibl in the group of Prof. Harald Giessen at the 4th Physics Institute printed microobjectives with a diameter and height of only 125 µm, even on optical fibers. The permits the construction of novel and extremely small endoscopes which are suited for smallest body openings or machine parts that can be inspected. The optical design was realized in the Stuttgart Research Center for Photonics Engineering by Ph.D. student Simon Thiele from the group of Prof. Alois Herkommer at the Institute of Technical Optics in Stuttgart.

Timo Gissibl also printed optical free form surfaces and miniature objectives directly onto CMOS image chips, which thus create an extremely compact sensor. Using such optics, smallest cameras from drones that are not larger than a bee are possible. Also, smallest sensors for autonomous cars and robots are conceivable. Even smallest body sensors and surround-cameras for cellphones could be realized.

The researchers were also able to combine their optics with illumination systems. The optics on an LED which concentrates light in a certain direction can thus be extremely small. Additionally, illumination of ring-shaped areas, triangles, or elongated rectangles can be realized with such miniature free-form optics.

The Stuttgart researchers believe that 3D printing of optics is going to open an entire new ear of optics manufacturing. “The time from the idea, the optics design, a CAD model, to the finished, 3D printed micro-objectives is going to be less than a day”, states Professor Harald Giessen. “We are going to open potentials just like computer-aided design and computer-integrated manufacturing did in mechanical engineering a few years ago”.

The project was supported by Baden-W?rttemberg Stiftung within the project “Spitzenforschung”. The researchers have close ties to industry. The Karlsruhe startup Nanoscribe, which was founded by researchers from KIT, constructed the highly precise femtosecond 3D printer. Carl Zeiss AG in Oberkochen regularly gives the team advice. And some of the world’s leading endoscopy manufacturers can also be found in the state of Baden-W?rttemberg.